Dr. Something
Silly-Sad Chamber Pop from Portland, OR

Greetings! At long last, I have news about some upcoming releases. I’ve been working on a series of songs about Portland-area transit centers that will be most likely be released in the fall of this year. Also, I will be releasing the official single “Beaverton TC,” which includes the fabulous rhythm section of Jacob Anderson and Michael Wilding, in the late summer! Stay tuned for more details.

Benefit for The Friday Feed

I’d like to let you know about an upcoming show for a special cause. Back in July of this year, I started helping out with a small, volunteer-run operation to help distribute food to the homeless called The Friday Feed. It was started by two friends, Alexis Smay and Jeff Tuyay, in the midst of Portland’s ongoing housing crisis. It’s a small operation, but with the financial and volunteer help of friends we’ve been able to provide food to many people as well as water and clean, dry socks and other supplies. Alexis has also used this group to coordinate winter clothing donations to other local groups such as the Hazelnut Grove community and Right 2 Dream Too.

This Sunday, November 13th at The Waypost  (3120 N Williams), I’ll be playing a benefit show for this project along with revered local comedian and songwriter, Lucia Fasano, and the enchanting acoustic duo Bevelers. I’m really excited about this line-up as well as raising funds to continue distributing food and supplies to those in need! The show starts at 7PM, is 21+ and there’s a $5 cover. For more information, see the Facebook event page:  https://www.facebook.com/events/1329464650399618/ 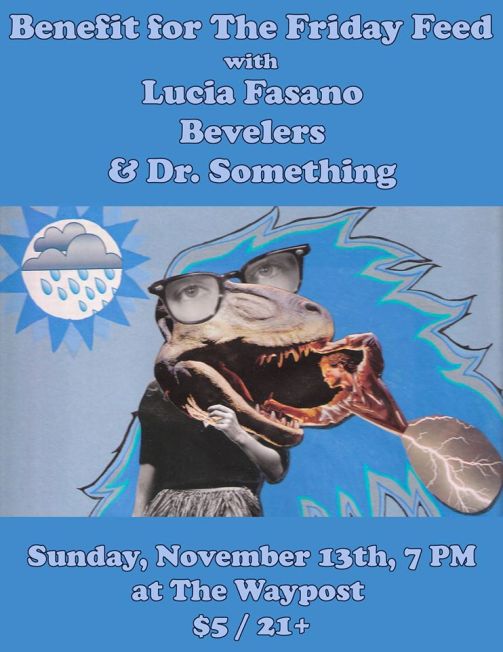 Here’s a fantastic video of Bevelers performing at The Banana Stand:

And here’s the music video for the title track of Lucia Fasano’s new album, Radio Silence:

A New Halloween Track and More!

I’m pleased to let you know that I’ve released a spooky song about Count Dracula to get everyone in the Halloween holiday spirit! Check it out below.

“Here Comes Count Dracula” is also being used as the theme song for a  new podcast called  What, Like it’s Hard? which is all about the creative process and collaboration . More specifically, it’s about three witty and analytical friends  writing a horror movie screenplay together and taking a bunch of listeners on the ride!

In other news, The latest Dr. Something EP, Rustic Machinery, has been getting some really nice reviews. Here are some quotes and links:

“[A]n indie bedroom/garage recording project that has the bombast and sentimentality of musical theater, but also the deliberate lyrical strangeness and unsettling vibe of art rock.” – Matthew Perpetua on Fluxblog

“The inventiveness of the composition and arrangements delights on every track.” – Matt Dinaro on  Rock and Roll Portland

As always, thanks for listening and happy October!

An Evening of Jokes and Comical Songs

If you read this, you’re probably aware I’ve been working on some new songs and most of the new stuff is kind of sad bastard music, so I wanted to have an explicitly silly, funny show before bringing forth the new sad songs into my live repertoire. That’s why next Saturday (May 7th) I’ll be playing a comedy-themed show with stand-up comedian Jon Washington and quirky pop/rock songwriter Ross Beach at The Waypost in North Portland.

Here’s a little jingle and promotional video I put together for the show. Enjoy!

I have multiple exciting updates at this time:

I’m excited to announce that I’ve  been working on recording a new 5-song Dr. Something EP which  I’m hoping to release sometime this coming summer or fall.

I’ve also recently revived my “Sounds Illustrated” project, creating hand-drawn sketches of  live performances by primarily local Portland bands/artists. It was an endeavor I first embarked on  back in 2010 for the music blog Crappy Indie Music, and which I’ve recently revived as a way to motivate myself to both see more live music and take up  drawing regularly again. It’s proven to be successful on both those counts and I’ve also found drawing is a great way to curb my anxiety in crowds without drinking. It’s also a good  way to promote Portland’s ever vibrant music scene. You can find all of these drawings on my site under the “Sounds Illustrated” heading. They can also be found on  my various social media. I hope you enjoy them and that they encourage you to explore Portland’s live music scene as well.

My friend Pokey, a.k.a. Eric Lindstrom, recently completed a beautiful and moving short film called Cat. The soundtrack, comprised of Pokey’s original music, is now available on Bandcamp. I played piano and recorder on some of the songs and current and former Dr. Something collaborators Matt Batchelder, Amy Baxter, Erika Garlock, David Percy, Christie Welsh and Sean Welsh are also featured on the soundtrack among other talented musicians.

Finally, the band All I Feel Is Yes, in which I play keys and Dr. Something members Mike Chastain and Jacob Anderson play drums and bass, respectively, has some  big projects in the works. We’ll be releasing a live album on Friday, June 10th and we’re also in the process of recording a studio album. We’re excited to share this  new music! Mike has also been sending out a monthly newsletter including updates, video and free music downloads from our weekly improv sessions. You can sign up for it by clicking here.

As always, thanks for listening!

I’m happy to share a new Dr. Something music video with you! It was premiered on Saturday, November 7th at The Waypost in North Portland to a warm and wonderful crowd and is now available online.

For this video, I collaborated with local time-lapse photographer Joseph Appel to create a beautiful and melancholy video for my song. It utilizes beautiful photography of natural and urban landscapes in and around Portland to enhance the song’s themes of isolation experienced during illness and the process of confronting one’s own mortality in a society that overwhelmingly attempts to hide it.

Starting off the evening will be the beautifully eerie sounds of Bone & Bell, then we’ll be playing our signature off-kilter piano pop, followed by the expertly-crafted bluesy folk of Shoeshine Blue.

We’re also excited to be projecting some wacky videos, including a number of brand-spankin’ new ones.

Good news for folks who love keeping time and weird-but-twee things: 2016 Intergalactic Pin-up Calendars are now available!  They feature copies of my hand-drawn artwork portraying 12 hypothetical creatures from beyond our galaxy! Prints are full color on glossy paper with comb binding.

You can currently find them on my Bandcamp merch page or at live shows. I’m currently looking into selling them at local consignment shops as well. If you’d like to sell these in your store, email me at drsomethingmusic “at” gmail “dot” com.

My new EP, Tomorrow’s Just Fiction, is now available on Bandcamp. I’m very proud of how the arrangements and recordings turned out and am very excited to share this with all of you.  It features Mike Chastain on drums and was mastered by Adam Gonsalves at Telegraph Mastering.

There will also be a release show and concurrent cassette release happening on the evening of Friday, June 12, at The Waypost, featuring an audio/visual Dr. Something performance as well as music from Bone & Bell and Youngest of Elders (SF).

It’s great to see the video for Play Fair PDX, a group working toward fair pay and labor practices for Portland Parks and Rec workers, getting some press.  The video was produced by my friend Judith Pulman, animated by my friend (and All I Feel Is Yes bandmate) Mike Chastain of Umami Media, and features art by comics artist Hazel Newlevant and my song “Life Inside.”

Dr. Something
Blog at WordPress.com.